What are Dosha and Prakriti?

Alakh Yoga Teachers just want to incorporate yoga into your daily life and help you in becoming a certified yoga teacher. So, join our 200 Hour Yoga Yoga Teacher Training in India for an exciting and rewarding life journey.

Dosha is one of the most intriguing principles of Ayurveda. It is because the classical Ayurveda text states that they cannot be seen but become visible only through their functions. This looks a little mystical but the same thing can be said about electricity as well. One cannot see the electricity but we know it because of the things that it does. Well, Dosha is more complicated, they are complex physiological systems and not a single entity like electricity.

We all know about the sympathetic and parasympathetic systems in the body. Ayurveda actually proposes 3 kinds of systems as compared to the two mentioned in allopathy.

Vedic science believes “Yatha anu, tatha parmanu”, meaning – As is an atom, so is the universe. So let us try to understand the concept of Dosha with the example of an atom. An atom can undergo 3 kinds of functions – either it is hyperactive with excess energy (Vata), or in the state of transformation through heat/chemical reactions (Pitta), or stable inside a molecule (Kapha). These 3 functions are able to define the state of an atom at any point in time. They are the 3 grand systems of function that work as well on an atom, as inside a human body.

It is interesting to note the meaning of the word “Dosha”. It is a Sanskrit word, meaning “the one which maligns or spoils”. They run the body so why are they called Dosha? It is because they have their own inertia. They are automated systems, with a tendency to corrupt. Let us take an example of a machine. If the machine is made to run for an exceedingly long time, it might break its parts, unless it is stopped by some external force. Again, it might get burnt in a similar condition, unless stopped. If not run for many days, it might become stuck and has to be cleaned, in order to ensure runnable condition. Now Dosha works in the same manner, they go on producing their syndrome unless balanced by the body physiology. They are not auto-correcting or conscious systems. Because of their inherent characteristic to go wrong, they are called Dosha.

Now let us try to define the 3 systems in the context of the human body. Dosha is a mechanism to address the utilization of energy inside the body. There are 3 fundamental kinds of energy – Kinetic energy, heat (transformational) energy, and latent energy. Here Vata is the system for handling kinetic energy, Pitta is for heat energy and Kapha is for latent energy.

Similar to the sympathetic system, Vata is the lord of all activities happening in the body. Whether it is the blinking of the eyelids or a game of sword fighting, Vata is involved everywhere. Now it looks to be a pretty broad spectrum and a little vague as well. But it can be clarified by understanding the sites of each Dosha. In the case of Vata, all nerves are the abode of Vata, which means that all nervous communication comes under Vata. Similarly, all hormonal communication comes under Pitta. The absence of activity or conversion gives place to Kapha, which is a passive system respectively.

Each Dosha has its special sites, functions, and qualities.

Pitta- Region from the diaphragm to pelvis – mid abdominal cavity.

Kapha – Above the diaphragm

Vata – all activities involving a change in kinetic energy

Pitta –  all activities involving a change in Heat energy

Kapha – all activities involving a change in Latent energy

These systems are not only governed by the Dosha, they are also formed by them during the gestational period of an individual, as the foetal development takes place.

This brings us to another important aspect of Ayurveda – Prakriti, or the fundamental body constitution, which is unique for everyone.

Now all persons have 3 systems in the body, but their bodies are all different because the systems have a different level of dominance in the body physiology.

Let us take the example from the construction industry. All architectural structures have the same ingredients – bricks, cement, sand, etc. But the base of a swimming pool will have a different proportion of the same ingredients as compared to the walls of the building. It will be more resistant to water-based erosion, whereas the external walls will not be so water-resistant but thicker and stronger. In a similar way, the body of each individual is dissimilar with different Dosha supremacy.

Prakriti or the body constitution is formed by the combination of 3 Dosha in different combinations. Examples of Prakriti are –

Vata, Pitta, Kapha: Vata dominant Prakriti with Pitta as the second dominant Dosha and Kapha as the recessive Dosha.

Let us consider the first example of Prakriti – Vata, Pitta, Kapha. Such a person will be inherently hyperactive, thin with scarce hair, prone to anxiety, etc. which are attributed qualities of Vata.

Prakriti decides the physical and mental attributes of an individual. Not only this, but it also gives an accurate prognosis of diseases that can easily occur, because of his Dosha combination. Now digestion of the above-mentioned person (primarily Pitta function) will have a tendency to get deranged by Vata, causing indigestion. He will be selectively prone to Vata-based disorders like arthritis, epilepsy, paralysis, etc.

In the case of the second example, the Pitta dominant person will be athletically inbuilt, with strong digestion, and prone to anger. This person will be more prone to hyperacidity and blood/skin-based disorders.

Prakriti can be calculated based on the physical examination and general questioning by an experienced Vaidya. It can be accurately examined by the Nadi pariksha as well. Prakriti examination is the basis of all treatment in Ayurveda. Without a proper Prakriti diagnosis, ayurvedic treatment will be like shooting arrows in the dark.

Naturopathy Techniques For A Healthy Life

How to Use Drinking Water For Your Body Detoxification 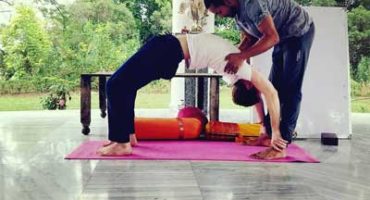 5 Qualities To Look For In Your Yoga Instructor